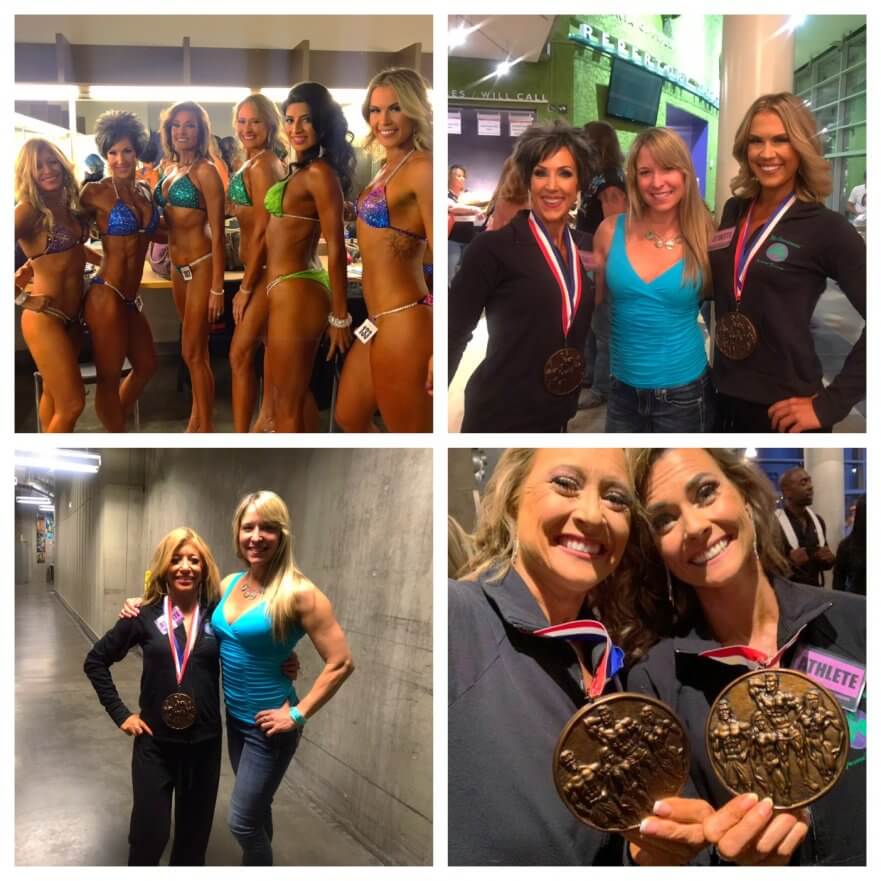 Most of you who follow along know that my “No Mullarkey” Team competed last weekend in the NPC’s Whitney Jones Classic in Mesa, AZ. Seven AMAZING women stepped on stage and conquered their goals of competing in a Bikini Competition. Here are the results and a recap…..

Trudy Shope took an impressive 2nd in her Masters Bikini Class. This was Trudy’s first competition and she has been training virtually with me since the end of last summer. It was so awesome to see Trudy come out of her shell during this process, which is a heck of a lot more rewarding than a medal. I watched a shy and self conscious woman absolutely rock the stage with her presentation. You would have never known that she was terrified to step on stage. I am beyond proud of her accomplishments and I am looking forward to seeing her back on stage in November.

Gina Sproule took 3rd in her Masters Bikini Class right next to her sister, Trudy. This was Gina’s second competition and I am so impressed with her work ethic and dedication during this process. Gina began virtual training with me back in July and has lost a total of 80 pounds on her weight loss journey. After losing 60 pounds she approached me with the goal of competing in her very first bikini competition. Well she more than achieved that goal and I am looking forward to her getting back on stage with her sister in November.

Tammy Blackwell took 3rd in a very competitive Masters Bikini Class in her very first competition. You would never know this hard body is turning 50 years young next week. You talk about one dedicated mother and what was so cool about this experience is that she did this with her daughter, Tia. Tammy is one driven lady and I have no doubt with a little work on her stage presentation that she will be bringing home the first place trophy in the near future. Way to go Tammy and what a great role model she is for her family!

Kelly Trewhella took 4th in her Masters Bikini Class and was competing in her 4th competition. Kelly is another introvert who I have loved watching come out of her shell as well. Posing has been a huge challenge for her and this was by far the best she looked on stage, not only with her posing but with her physique as well. Kelly began training with me virtually two years ago and has now switched to group training. She never misses a session even on those days when she is in pain due to her neuropathy. She is one tough cookie and I am so proud of her hard work and persistence. Lean muscle mass takes a long time to build and Kelly is a walking example of what dedication to weight training brings.

Tia Blackwell, Tammy’s daughter, took 5th place in her Novice Bikini Class. This is quite impressive considering Tia decided 4 weeks out to compete in her very first bikini competition because she wanted to compete with her mother. What an awesome mother/daughter bonding experience and I couldn’t be more impressed with her placing. I am pretty sure that this lit a fire under her rear and she will be getting on stage again in the near future. I am excited to see what she looks like and how she places with a full 12 week competition prep.

Jess competed in her very first bikini competition, which you would never know by the way she handled herself on stage. Of all of my competitors she takes home the prize for best posing and stage presentation. She absolutely ROCKED her performance up there by going out on that stage with confidence. Jess began training almost a year ago with me in group training and has completely changed her physique. With a little more muscle, this spit fire from Ecuador is going to placing in the top 5.

Lea-Ann Ellison contacted me to help her with her figure posing for this competition. We met three times beginning six weeks out to work on her posing and stage presentation. Lea-Ann was a natural and I knew that she would handle herself on stage like a pro. She ended up placing 2nd in her Masters Figure Class and 1st in her Novice and Open Classes. She took 2nd Overall in a very competitive figure competition. Way to go Lea-Ann!!!!

This was one of the strongest groups of competitors I have put on stage in awhile and I just wanted to take the time to congratulate each of them for their hard work. Getting on stage and being judged is not easy and is very subjective. Not only do these ladies need to be strong physically, but also mentally. It doesn’t matter if they bring home hardware or not, it matters that they had the courage to step on stage to be judged. Each of these gals killed it and I couldn’t be more proud to be their coach. What I love most about this journey for them is not that they placed, but that they have gained more strength, confidence and self-esteem. Each one of these ladies was successful in doing just that.

If you have had the goal of competing in a physique, figure or bikini competition, please contact me today for a FREE consultation. The “No Mullarkey” Team makes a name for themselves on the competition stage.

Get Updates From Karen!